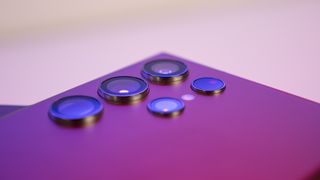 What you need to know

When it comes to astrophotography, the Pixel series is often regarded as one of the best smartphones for capturing the stars. However, it appears Samsung has something to say about it, as the company has just launched a new Astrophoto feature for the Galaxy S22 series.

Astrophoto is a new feature available in the Expert RAW app for the Galaxy S22 series that can help users capture stunning photos of the stars. As Samsung explains (opens in new tab), the feature uses "advanced AI segmentation technology and multi-frame processing" to capture images of the stars over a set amount of time, up to four minutes.

Users can turn on a Sky guide to get a clear view of the constellations. That way, you can be sure to capture Orion in your shot. The feature also appears to work regardless of the camera sensor you're using.

In addition to Astrophoto, Samsung is also highlighting Multiple exposures in Expert RAW, which lets users shoot multiple images at once. Users can then combine photos to make creative images with a manual overlay.

Both Astrophoto and Multiple exposures can be enabled after updating the Expert RAW app. In the settings menu, simply toggle the "Special photo options" to access the new features.

Lastly, Samsung details its new Camera Assistant module that it recently launched in Good Lock. The app gives users additional controls and features in the stock camera app, such as Auto HDR, faster shutter speed, and more. Galaxy S22 owners running One UI 5 can download Camera Assistant in Good Lock and access the module in the Camera settings. You'll also need One UI 5 to get the latest Expert RAW features.

If the standard Galaxy S22 is too small for you, the S22+ is the answer. It sports a large display with an even bigger battery that should help you get through more of the day. Not to mention, it has a great set of cameras and performs spectacularly.

Derrek is a long-time Nokia and LG fanboy who loves astronomy, videography, and sci-fi movies. When he's not working, he's most likely working out or smoldering at the camera.