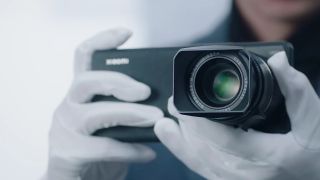 What you need to know

If you miss the short-lived days of sticking modules and accessories to the back of your phone, you'll love Xiaomi's latest concept. The Xiaomi 12S Ultra Concept is a device that improves upon the already impressive camera specs of the company's latest flagship while taking it to another level by sticking a full lens on the camera housing.

The result? A smartphone that turns into a professional camera in a snap. It's something that many smartphone OEMs have attempted through various means, such as Samsung with its camera-phone Galaxy S4 Zoom and Motorola with the Hasselblad True Zoom Moto Mod. Xiaomi brings the idea to the modern smartphone era with impressive specs to back it up.

The Xiaomi 12S Ultra we reviewed already packs an impressive 1-inch sensor that rivals many of the best Android phones on the market. According to Xiaomi, the new concept device stuffs two 1-inch sensors into the camera housing. The center-mounted sensor is meant to be used with full-size lenses, such as the Leica M-series lenses. This is thanks to the M-mount built into the camera ring that allows lenses to be outfitted with just a twist and (rather pleasing) click. The camera structure has also been reinforced to support lenses, and sapphire glass was added to protect the surface from the motion of attaching and detaching lenses.

Phone📱? Camera📷? BOTH! What would you classify this as? #Xiaomi12SUltraConcept pic.twitter.com/uzJVzifou4November 2, 2022

Xiaomi highlights how this allows the phone to capture "authentic depth of field," something many smartphones try to achieve with separate depth sensors or AI trickery. The camera system also supports professional photography features such as focus peaking, zebra patterns, and 10-bit RAW capture.

While that all looks and sounds nice, the downside is that we likely won't ever get our hands on it. According to Android Authority, Xiaomi has no plans to release this concept phone publicly, which is a bummer. Still, it gives us a good idea of where smartphone photography is going and the ways we can further blur the lines between smartphone cameras and professional ones.

Derrek is a long-time Nokia and LG fanboy who loves astronomy, videography, and sci-fi movies. When he's not working, he's most likely working out or smoldering at the camera.